New blog- New international momentum for climate progress – is there room for optimism?

This week, we published a new blog exploring developments in international climate politics. The newest member of our team, Elliot Settle, gives his thoughts on the domestic shifts in the US, Brazil and China and argues there is room for optimism that climate progress is possible.

For the first time in the US, environmental group The Nature Conservancy has purchased a $2 million insurance policy on a coral reef in Hawaii, allowing it to receive vital funds quickly as needed in order to conduct repairs on these fragile ecosystems.

This follows a similar scheme in Mexico in what was called “a radical experiment in finance” and that could provide a vital proof of concept for protecting coral reefs or perhaps even larger ecosystems in the future.

Coral reefs are vitally important for preserving marine ecosystems and ocean biodiversity. According to the EPA, a quarter of all marine life is dependent on coral reefs at some point in their lifecycle. They also provide significant protection against storms and tsunamis by absorbing the force of the waves.

As the continuing scandal at FTX unfolds, many industry insiders are questioning how major lapses in corporate governance continued for so long. A recent article in Forbes suggests that part of the issue came from several ESG ratings firms endorsing the company despite seemingly obvious deficiencies.

The Wall Street Journal reported that ESG ratings firm “Truvalue Labs gave FTX a higher score on ‘leadership and governance’ than ExxonMobil [even] though the crypto exchange had only three directors on its board. The directors were Mr. Bankman-Fried, another FTX executive and an outside attorney.”

The New York Times is now focusing on several highly questionable practices in the board of directors of Tesla, a company whose poor governance has seen them score poorly in Management Quality assessments by Transition Pathway Initiative despite being the world’s most high-profile EV company.#

The disingenuous climate claims of the Qatar world cup

The latest controversy to beset the FIFA World Cup in Qatar has revolved around its claim to be the ‘first carbon neutral World Cup’.

FIFA’s climate neutral initiative has relied on purchasing large quantities of carbon offsets, a strategy experts contacted by the BBC called “deeply misleading and dangerous” given these programmes are not in fact removing any carbon from the atmosphere.

The Cup is due to be responsible for 3.6 million tons of CO2 emissions during the month-long operation of the event, roughly equivalent to the yearly emissions of the Democratic Republic of Congo. Some estimates have placed this figure as high as 10 million tons which includes the emissions of flying hundreds of thousands of fans into Qatar for the event.

Solar is taking the lead in renewable energy 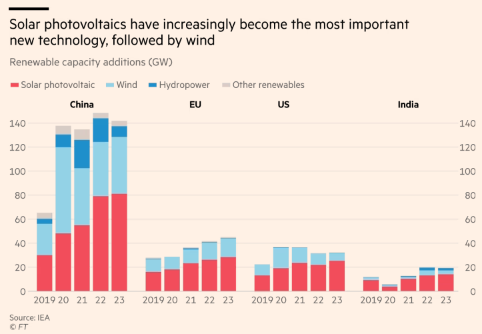 Figures from the Financial Times show that in four major global sectors, solar panels have comprised approximately half of new additions of renewable energy, showing their significant contribution to the energy transition. According to Fortune Business Insights, the solar power industry is expected to grow by $109bn by 2028, driven by lower technology costs and large untapped energy potential.

This graph also illustrates the extent to which China dominates the market in terms of the production of renewable power sources such as solar panels. According to the IEA, China has installed more renewable energy than any other country year after year, though ironically, it is still a voracious consumer of fossil fuels.

Despite positive steps to improve its climate performance, including the installation of solar panels, China has been slow to progress its environmental policy.