On Sunday 6th November, the COP27 summit began in Sharm El-Sheikh, Egypt. Following the conclusion of the negotiations we’ll offer some thoughts on COP27 in a dedicated post.

Last week at COP27, the UN’s Food and Agriculture Organisation committed to publish a roadmap for a sustainable food system – comparable to the International Energy Agency’s (IEA) ‘Net Zero to 2050’ roadmap.

The announcement from the FAO’s Deputy Director Zitouni Ould-Dada follows a campaign led by the FAIRR Initiative, which gathered the support of investors representing $18 trillion in assets as signatories on a letter to the FAO earlier this year. The letter has since been supported by Ex-UN Secretary General Ban Ki-moon, and former UN climate chief Christiana Figueres.

Jeremy Coller, chairman of FAIRR, welcomed the announcement, saying it would provide “much needed clarity” for the sector.

This is a significant step in the transition towards a more sustainable food system, and investors hope the plan will help inform effective policies whilst driving investment into companies, projects and technologies to ensure a just transition for the global food sector.

The initial US midterm election results were announced this week after polls closed on Tuesday, heralding an underwhelming performance for Republicans who were projected to gain vote share and a large amount of seats in congress.

This outcome may come as a relief to sustainable finance professionals, many of whom predicted that a strong Republican majority would take measures to restrict ESG minded funds from operating throughout the US. ESG investing has become widely unpopular throughout the Republican party for ideological reasons. Without full control of congress however, Republican anti-ESG measures are very unlikely to pass.

If current projections hold true, the expansion of the Biden administration’s legislative agenda and his strong support of private investment in green industries will also likely struggle to become law. An evenly divided congress may have other disadvantages for the financial community, given that it will likely lead to a gridlocked US government unable to enact decisively and in a timely manner to economic and fiscal events.

Looking ahead to a fractious and divided political environment in the near term, international figures and investors alike feel they have much reason to worry.

The official representatives of ten national Football Associations, including the English FA, have issued a statement urging FIFA to take measures to improve worker safety and human rights in Qatar, where the World Cup is due to be hosted this month. FIFA has argued that FAs should “put politics to one side” with regards to Qatar. This letter indicates that FIFA’s ineffectual stance has been poorly received by its FA members.

Qatar has received widespread criticism for its treatment of the thousands of migrant workers employed to construct sports facilities. A Guardian report estimated a minimum of 6,500 migrant construction workers have died between 2010-2021, a figure the Qatari government disputes. Amnesty International has called the event a “World Cup of Shame” where workers are abused and exploited.

Qatar has invested heavily in the World Cup’s success, which could be significantly impacted by these controversies and others, including its treatment of the LGBTQ+ community. An article in The Economist recently said that “enjoying [the World Cup in Qatar] may require an offset to your conscience”, calling the tournament “tarnished”. 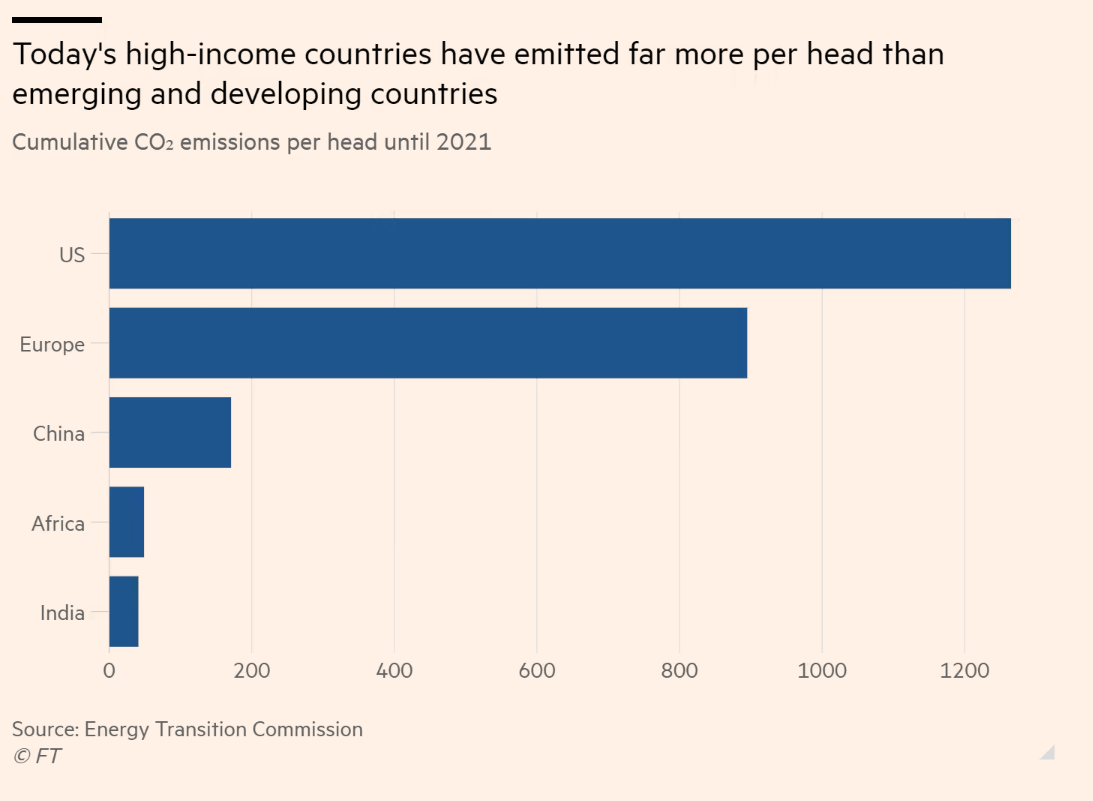 The debate around ‘Loss and Damage’ – richer nations providing financial compensation to developing nations that are more vulnerable to climate change – has dominated discussions in and around COP27. So far, only a handful of nations have explicitly committed funds for this purpose, following efforts by Egypt and other nations to increase the priority and visibility of this issue.

This graph from the FT illustrates why many developing nations believe it is unfair that they bear the brunt of the climate crisis despite having contributed so little to it. In terms of cumulative CO2 equivalent emissions per capita until 2021, nations like the US have emitted vastly more than the entire continent of Africa.

Developing countries will need $2 trillion in annual climate funding from public and private sources to adapt and transition to a low carbon economy in line with current climate goals according to new data released during the conference. While half of this funding is expected to be raised locally, much of it will need to come from international private and public finance.

This data suggests that ESG-focused funds will need to reevaluate their international priorities to support emerging economies. Some financial figures have argued that sustainable investing has a systemic problem of avoiding substantial involvement in developing and emerging countries due to perceived governance and political issues.