On Monday 31st October, Luiz Inácio Lula da Silva, better known as “Lula”, narrowly won the election for Brazil’s presidency and will assume the office in the new year. Lula campaigned as an environmentalist in contrast to his opponent Bolsonaro. The results will have seismic effects on the health of the Amazon rainforest and the climate crisis more generally.

Even before assuming office, da Silva’s election prompted a global recalibration of Brazil’s position in international climate politics, with many nations signalling their openness to rejoin the Amazon Fund that Bolsonaro had all but disbanded. Additionally, his team is in conversation with the governments of the DRC and Indonesia (which collectively along with Brazil control half of the world’s rainforest) to create an “OPEC of rainforests” to protect their natural resources.

Reuters reported that many ESG funds were optimistic and may resume purchases of Brazilian government bonds under Lula’s administration. However, many remain cautious- a divided legislature dominated by Bolsonaro’s allies severely will limit the president-elect’s ability to revise his predecessor’s domestic environmental policy.

A group of NGOs, including the French offices of Oxfam and Friends of the Earth, have written an official complaint to BNP Paribas, one of Europe’s largest banks, threatening legal action over the climate impacts of its investments in fossil fuels.

They cite France’s “corporate duty of vigilance” law passed in 2017 that states large corporations have a responsibility to account for and actively address the human rights and climate impact of their commercial activities and investments.

BNP Paribas argued that it is actively and progressively reducing its fossil fuel investments and its current stake “is in line and compatible with the perspective of financing a carbon neutral economy by 2050”.

This suit would be the first to target a commercial bank under this law, and if successful, more cases could follow if businesses fail to meet their legal obligations on managing climate risk, environmental damage and human rights abuses.

Ahead of COP27 in Egypt, the Guardian revealed that US government investments in fossil fuel exploitation in Africa have surged in recent years, in spite of commitments in Paris seven years ago. Since then, the US government has invested $9bn in fossil fuel projects in Africa, compared to $682million in sustainable energy. These investments have continued at a high level under the comparatively climate-conscious Biden administration.

The primary funder of these projects, The Export-Import Bank of the United States (Exim) has reportedly promised to spend an additional $650m on renewable energy projects globally in 2022, a figure that would still be dwarfed by its oil spending in Africa alone.

This substantial outsourcing of fossil fuel investment outside of US borders undercuts America’s global climate leadership, a key campaign pledge for Biden. Accusations of hypocrisy have emerged as the US takes steps to prevent expansion of these fuel sources by African nations while actively pursuing their profits themselves.

Emissions inequality in the UK illustrated by study 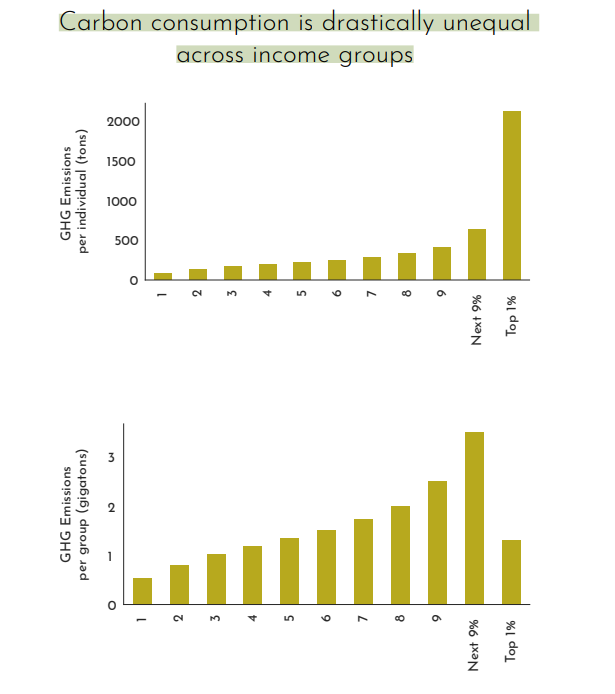 This study is not the first to come to this conclusion, which serves as a continuing reminder of this uneven distribution both nationally and internationally. Groups such as Autonomy have argued that the only effective remedy to such a problem is a redistributive tax on carbon emissions, which it argues would raise £126bn from the top 1% alone.

Due to a range of political and economic considerations, few high polluting countries have established a carbon tax. Among those countries who have, there is significant variation in their scope and effectiveness. While it is unclear whether a carbon tax represents the best solution, governments have faced increasing pressure to introduce punitive measures against high emitters.